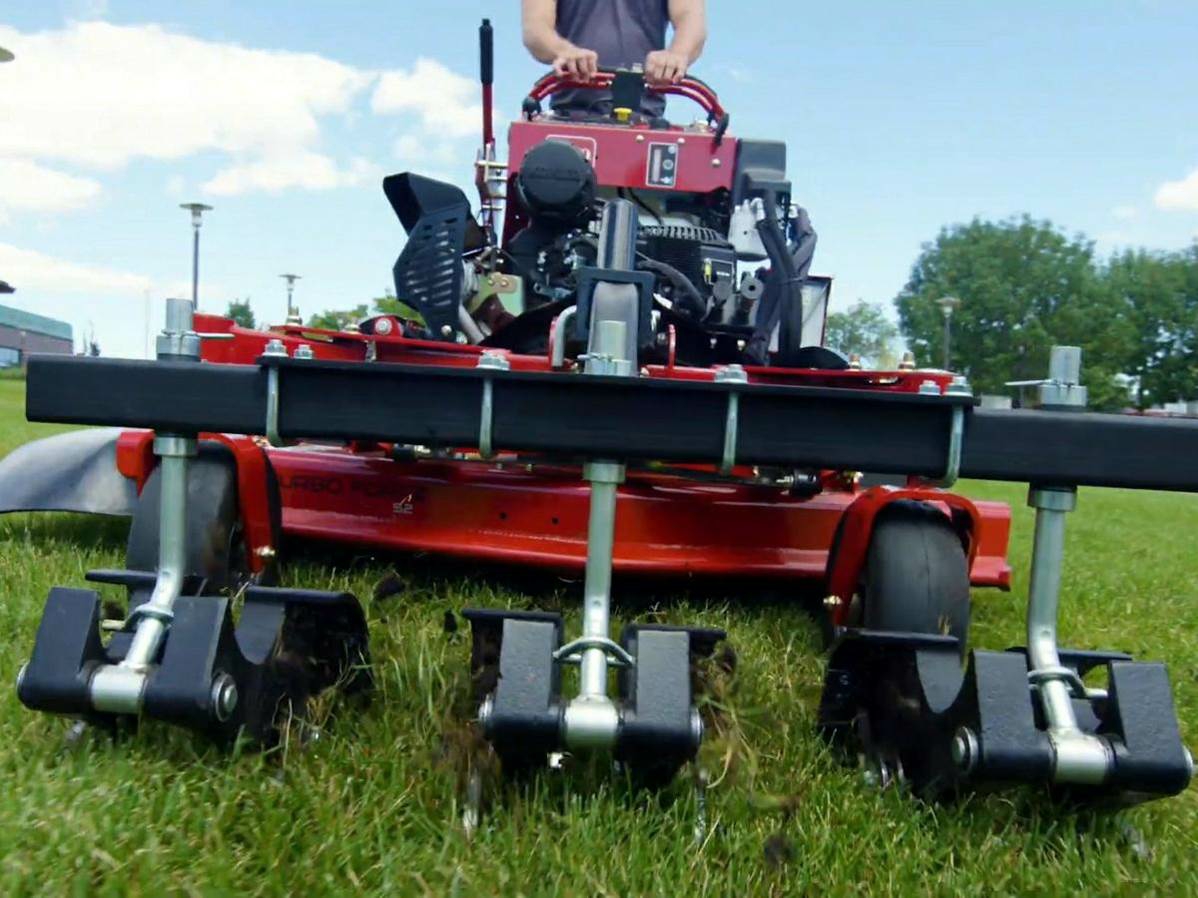 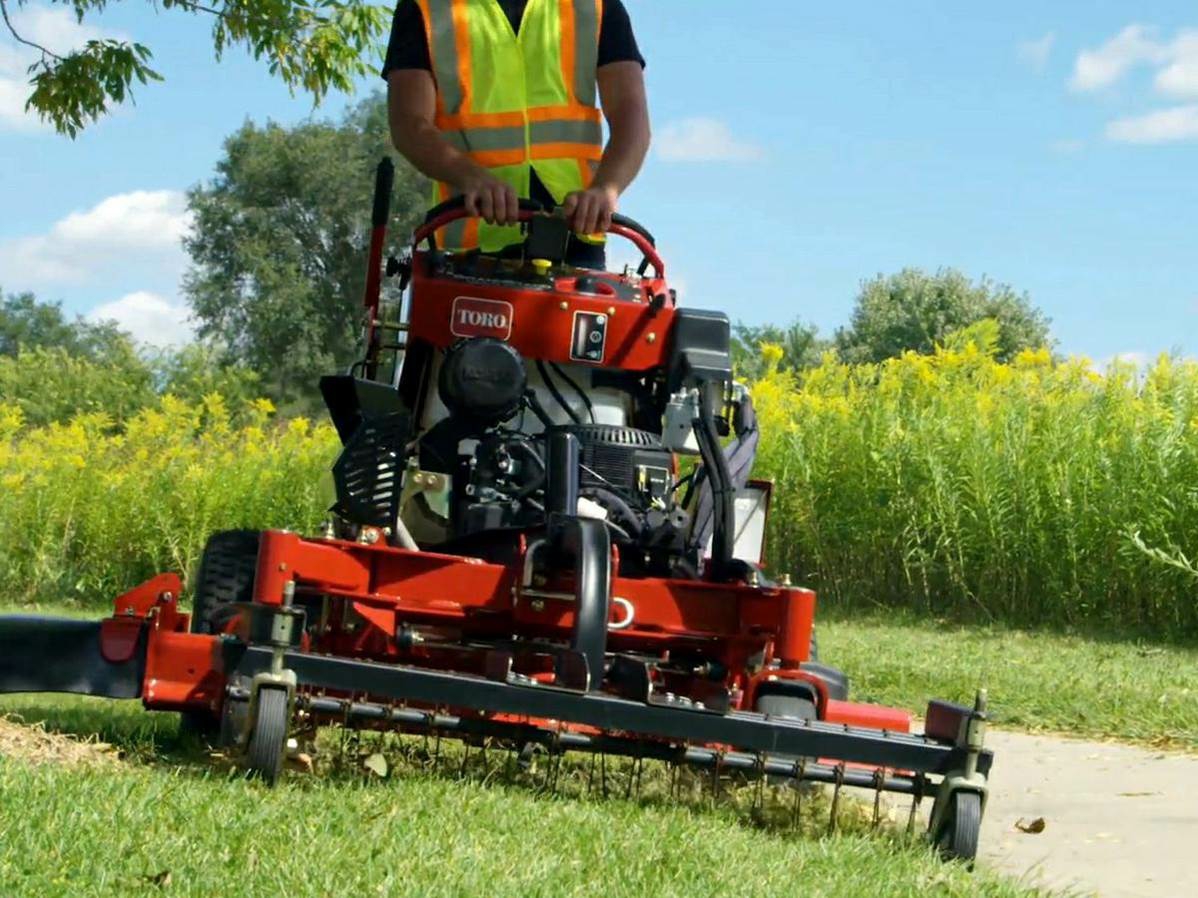 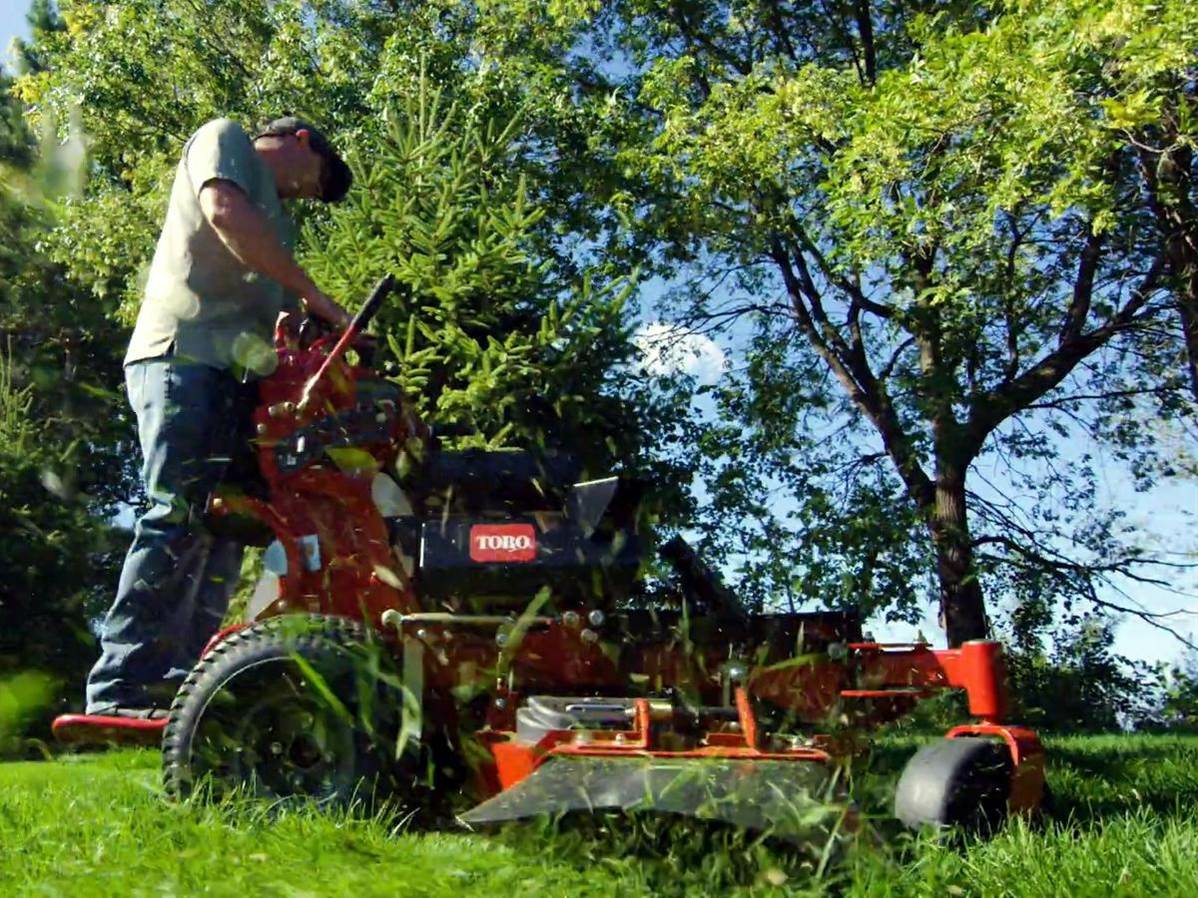 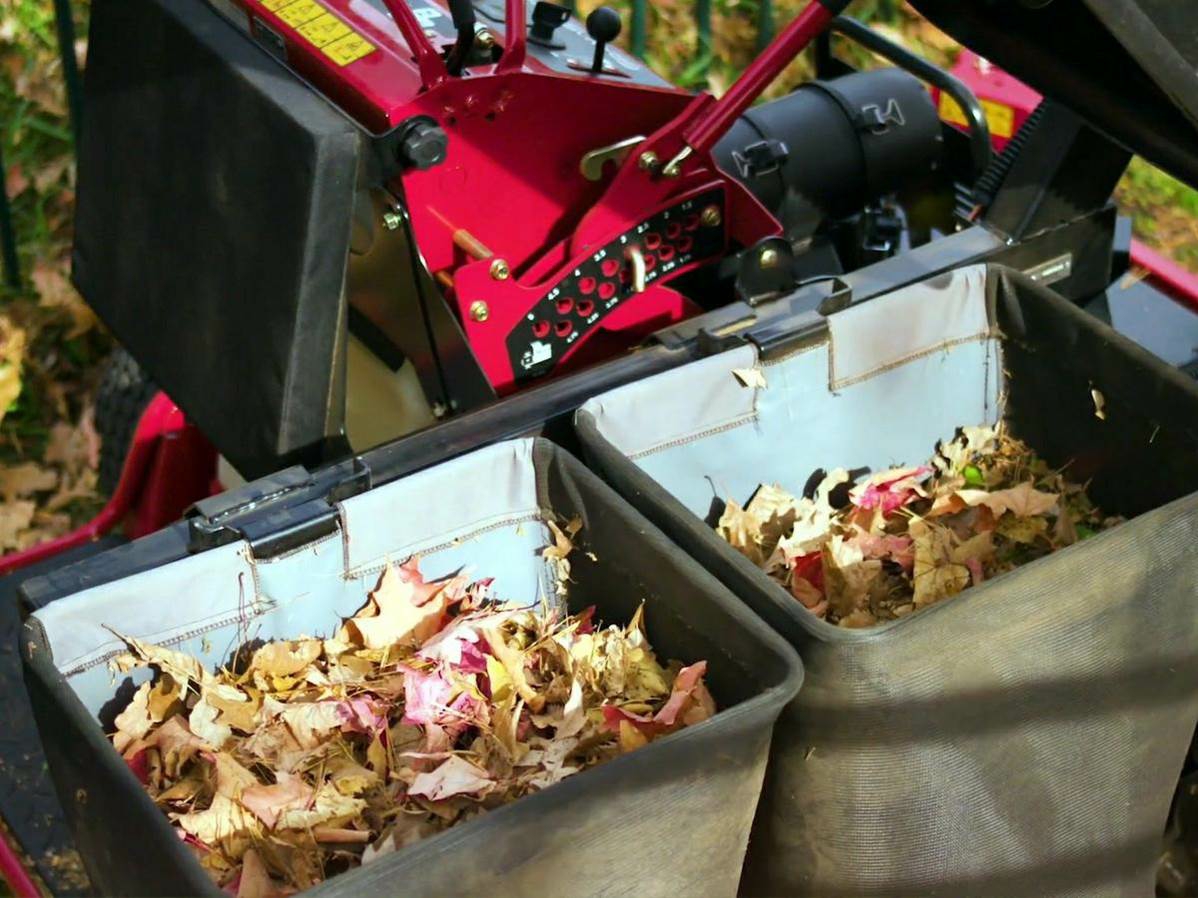 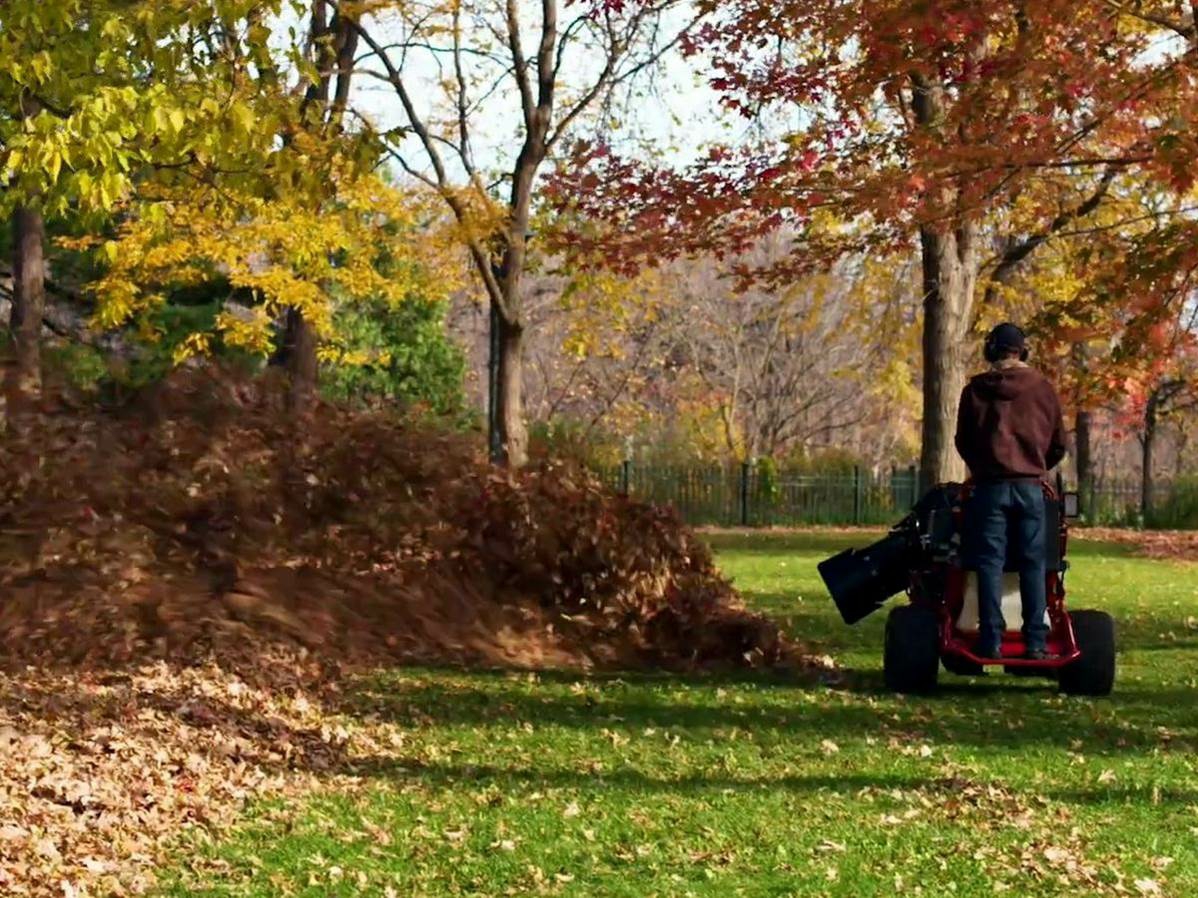 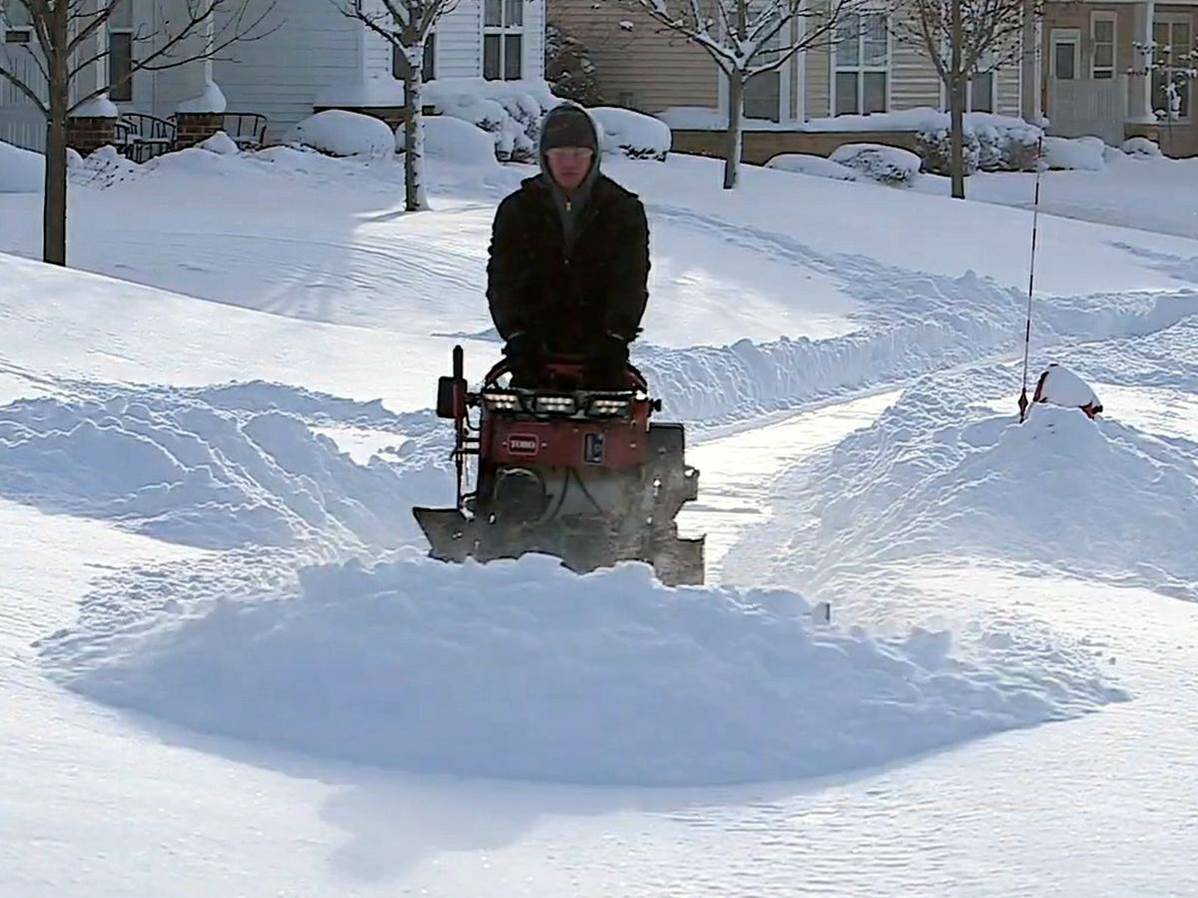 With the GrandStand Multi-Force models available in 52" and 60" you are able leverage your investment to be used for more than just mowing, by using it to push snow, blow leaves, de-thatch, aerate and more.
• Aerator
• Dethatcher
• Turbine Blower
• Leaf Plow
• Hydraulic Mulch Bucket
• Snow Blade
• Snow Blower
• Snow Broom

For most companies the problem with a dedicated plugger or dedicated blower or dedicated snow equipment, is that it sits around most of the year doing nothing, occupying space while you make payments. Once you've invested in the GrandStand Multi-Force, it can serve you in every season and for a small fraction of the price of a whole collection of dedicated pieces of equipment to serve your needs around the year.

There are always those times when you need to get off the mower, perhaps to pickup a piece of trash, to move a garden hose, or pick up a stick. With a sit down Z. one must, turn off the PTO, move the drive arms to the park position, put the brake on, possibly remove a seatbelt, stand up, and take that awkwardly long step off the mower. Then to get back to the mowing position all that has to be done again in reverse. With a GrandStand you can simply come to a stop, step off the mower, do what needs to be done. The blades will turn off, the engine will continue to run. To return to the mowing position, step back on the mower and lift up on the PTO knob. The brake would not be required on level ground.

Because you are standing on the rear of the machine and because there are no fenders covering the wheels, you have a natural view of what the rear wheels are doing. Most every Z operator has experienced, on a dew covered grass morning, that moment when you continue to pull back on a control lever because the machine is not moving to suddenly realize maybe the wheel is spinning. Then you turn your head and lean over enough to see if the wheel is turning and possibly the hole in the turf you just created. With a zero turn stander you know immediately if a wheel is loosing traction, allowing you to compensate and avoid tearing up the turf. Knowing what the wheels are doing is useful information to the operator.

With the platform raised, the GrandStand becomes much shorter than a sit down Z. The narrower models, like the 36” and 40” are even narrower than they are long and the reduced length allows them to easily be turned sideways on a landscape trailer. The 36” GrandStand for example turned sideways on the front of a 12’ landscape trailer only reduces the trailers usable length by 38" still leaving almost 9’ free for other equipment. You could put one 36” GrandStand and two 48” GrandStands on a 12’ trailer. You can also fit a full size commercial Z and 52” GrandStand on a 12’ trailer.

With the operators weight on the Grandstand’s rear platform it balances out the machine for optimum hill side performance. Better than a sit down Z and some users even claim it to be better than a walk behind on slopes.

Landscapers often run into objections, particularly from residential customers, that they don’t like big heavy equipment on their yards. Weight wise a GrandStand is somewhere between a walk behind and a sit down Z, but its appearance, smaller wheels than a Z and shorter even than a walk behind tends to draw fewer objections from your customers. For every objection you hear from your customers about big equipment, there very well may be a few more customers who feel the same but don’t say it.

With all the advantages, is the sit down Z going extinct?

While I do occasionally hear contractors say they don’t plan to ever buy another sit down Z, I believe there will always be places where a sit down Z is better suited and customers who simply want to sit rather than stand. Zero turn standers have had almost no penetration of the home owner market. Part of this is because they are only offered in expensive commercial grade versions at this point, but also some of the advantages just don’t translate to a home owner. Reduced trailer space for example is of little concern to the typical homeowner.

With a Grandstand the operator always has the option of stepping off the machine. In fact the Grandstand can be operated as a walk behind with the platform placed in the up position if desired. Compared to a sit down Z, the operator is trapped by the control bars and perhaps even a seat belt. No one plans to put a mower in a pond, but if it appears it may be going there, then there is no need to risk the operator going with it.
Available in 36" 40" 48" 52" & 60" - MultiForce available in 52" & 60" - TORO Limited Warranty: 5 Years / 1200hrs*